CTN hosted the 8th annual Transfer Motivational Conference at the University of Texas in Austin on June 9-11. The goals of the conference were to introduce community college students to university life experiences and motivate them to transfer to a four-year university. Ascender students from San Antonio College, South Texas College and Austin Community College attended.

Students arrived on June 9th and checked into their dorms in Jester Hall. They were then given free time to explore the campus and the city with their chaperones.

The conference began on June 10 with a welcome from CTN CEO, Dr. Chavez which was followed by an icebreaker led by Stacy Ybarra, conference director. Participants were given a crown to wear and asked to name their college and one random fact about themselves.

Next was a presentation on careers led by Ariel Flores, ACC Master AOS Advisor. After lunch, participants heard from keynote speaker, Dr. Johanna Moya Fabregas, Executive Director at Con Mi Madre. In speaking to the students, she emphasized the power of dreaming and the value of a college education, but at the same time, reinforced the value each of them would bring to the institutions they choose to attend when they are ready to transfer.

Dr. Fabregas received her undergraduate degree in Latin American Studies and French from the University of Wisconsin-Madison and her Doctorate in History at Indiana University, Bloomington. Her role of Executive Director at Con Mi Madre brings together Dr. Fabregas’ background and personal mission of empowering Latina students and their families by breaking down barriers to success. Her professional experience is anchored in education, leadership, and mentoring. She has been a professor, editor, project manager and consultant. She has significant experience in teaching and working with first-generation college students in many capacities: student, leader, mentor, and educator. Education is one of the most significant values in her family, who moved to the United States in search of opportunities for their daughter. As an immigrant, she came to the U.S. at 14 after living in four Latin American countries. Her parents became the most prominent advocates for her advanced education. She identifies with Con Mi Madre’s mission because she has lived it.

The next session was titled “Transfer Made Easy” led by Jeff Mayo, Assistant Director of the First-Year Experience at UT Austin, which was followed by an activity with balloons to demonstrate the necessity of time management.

CTN Board Member, Michael Guinn, led the next session where he has students “write it down and speak it into existence.” Besides being an actor and an activist, Guinn is a former 2 Time National Poetry Slam Finalist, Toronto International Slam Champion and 4 Time AIPF Slam Champion, and Great Plains Pile Up Slam Champion.  Michael also has more than 23 years of coordinating and hosting upscale open mics and national spokenword showcases. Michael is the director of Mike Guinn Entertainment and founder of Uplift Your Life, a 501c3 which addresses mental health and wellness globally.

After dinner, the students returned to share and present what they had written.

After breakfast in Jester’s Dining Hall, the next day began with the Financial Literacy session presented by Ariel Flores. This was followed by the Alumni Panel which consisted of Armando Sanchez, from ACC; Cloe Llanos from ACC and Diane Gorostieta from ACC. “The professors I had made me feel comfortable because I felt like I could be myself and ask them questions because they knew where I was coming from. I didn’t want to seem stupid, so this small step helped me now that I’m at Texas State University,” commented Armando Sanchez. The conference ended with a box lunch provided at check out. 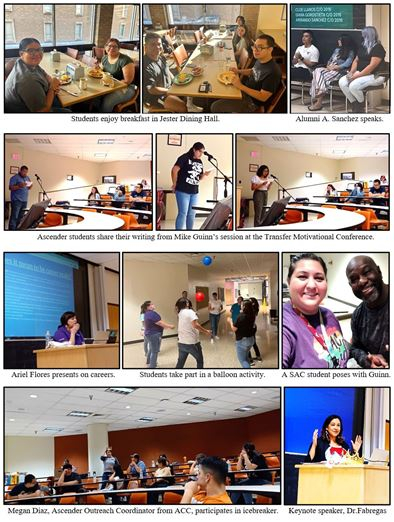