CTN hosted the Ascender Virtual Spring Seminar on March 31 and April 1st from 9:00 - 3:00. The third and final seminar for cohort 2021 focused on components of the Ascender framework for student and faculty advancement. The seminar began with a welcome and updates from CTN CEO Maria Chavez. She and Anna Alaniz, CTN Director of Professional Development, presented the first session titled “Reaching for the Finish Line: Retention in the Time of Omicron.” Participants read Ascender SAC student Sophia Farias’ poem and shared their strong lines which motivated discussion on the challenges students face that can hinder retention and persistence. Participants watched a short video “The Elephant, the Rider and the Path” that helped explain what was needed to make change happen.  They then discussed ways to support students and ensure their persistence to completion and transfer to a university.

In the session titled “Reversing Enrollment Declines: The Missing Latino Student,” presented by Dr. Chavez and Alejandra Polcik, CTN Leadership Fellow from ACC, participants reflected on the enrollment decline trend and what it means for Latino student enrollment and then considered different strategies to recruit students for the fall of 2022. Polcik had this advice “Instead of us asking the students to adapt to the educational system, we must adapt to them. We must change our recruitment efforts to match the students’ needs.”

After a break, teams went into breakout rooms to touch base, share updates on student progress, and discuss and share best practices.

Next participants heard from panelists in the session titled “Unleashing Students’ Potential Through Math” about their journey with math, how their potential was discovered, and advice they would suggest to give to students.  Facilitators were Mario Morin, CTN Math Professional Development Director and also STC math instructors Rosa Gutierrez, Jonathan Bell, both CTN Leadership Fellows, and Maria Del Carmen Garcia.

After lunch, the session “Cosecha Student Voices: Pedagogy and Self Determination” was presented by Stephanie Alvarez, CTN Scholar Mentor, Board Member, and UTRGV Professor. Alvarez shared her educational journey and commented that in college was the first time she read something she identified with and from that moment on something was different for her.  Alvarez presented Yosso’s Cultural Wealth Model with its forms of cultural capital that students of color experience. Then participants were asked to pick one of the forms, write about it, and share with a partner. They were then asked to share with everyone what they learned in their groups. Alvarez gave participants examples of how they might use the cultural wealth model to engage students in telling their own stories and the stories of those in their familial circle.

There were several objectives for the next session titled “Empowering Students to be Engaged Citizens: The Right to Vote” which was presented by Dr. Darriel Reynolds, Leadership Fellow from STC, Rosie Castro, CTN Community Leadership Mentor; and Armando Sanchez, ACC Ascender Alumni. One objective was to highlight one of Catch the Next's purposes as an organization which is to “empower young people to take responsibility for positive change for themselves, their families, and their communities” by providing programs that promote higher education, build civic action and citizenship and foster community leadership. Other objectives included illustrating why civic engagement in the form of voter registration is important for our students and how faculty in different disciplines can embed some of this content in their writing or math courses. Dr. Reynolds discussed why voting is important and shared one lesson plan to encourage student voting which included a video titled “An Act of Faith in America.” Rosie Castro then spoke about her journey into civic engagement and politics as well as her reasons for it. She said she realized early on that in a democracy without representation, it would be very difficult to change conditions for people. She also said that many students began voting in college and this is the time to instill in them the necessity to be good citizens. “We have rights, but also responsibilities,” she added.

Next participants heard from Armando Sanchez who spoke of his journey into the field of political science and the experiences that led him there and have made him want to become involved in politics. “This is a country of opportunity,” he said. “Hopefully, I can make an impact in this world.”

Day two began with reflections and responding to questions from the previous day which was facilitated by Maria Martha Chavez and Anna Alaniz.

The first session, “Navigating Complexity: College, Career and the Choices We Make,” was presented by Allegra Villarreal, CTN Consultant. In this session, participants evaluated factors that hinder career dreams in students’ lives and discussed ways to support student efforts to reach their college and career dreams.

Villarreal shared a demonstration lesson plan which incorporated a clip from the movie Coco. She also had participants read “La Silla” by Ruth Behar, underline strong lines, and comment on them. She then asked them to write their advice to Behar and share.  “Helping students navigate this complexity around college, career and choice should be an ongoing conversation across all disciplines,” Villarreal commented.

After a break, Helen Dailey, ACC faculty and Armando Sanchez, ACC Alumni, led the session titled “The Eternal Debate: Passion or Paycheck?” Dailey began by saying that “the occupations we select affect our wallets and our lives.” She then provided an overview of factors to consider in the pursuit of passion or paycheck in the selection of a career choice.

Next Sanchez shared his choice of changing from an auto mechanic career path to a political science career because he realized auto mechanics was more of a hobby whereas politics was his passion. Dailey shared her path as a high paying IT manager at a law firm to a career in higher education. She found she was not spending any time with her children, so she changed her job. “Pursuing the money was damaging my children,” she said.

The first session after lunch was titled “Building a Talent Strong Texas” which was presented by CTN Scholar Mentor Dr. Tina Jackson, Assistant Commissioner of Workforce Education at the Texas Higher Education Coordinating Board. Participants reexamined the THECB 60x30TX refined strategy. Jackson shared with participants primary indicators, targeted growth industries, and the top ten occupations. She discussed evidence-based grantmaking and why evidence-based research is critical. She spoke about other grants and their purposes as well.

In a discussion that followed, Dr. Chavez talked about working in silos and asked how we can best work better together. Jackson talked about building stackable credentials. “We should have conversations about each type of student, including those that are undecided,” she stated. “We should be intentional about complimenting what we are doing,” she added.

Following the break, the session “Freire's Pedagogy of Love” was presented by Yon Hui Bell, CTN Leadership Fellow from SAC. Participants learned about Freire's Pedagogy of Love including his belief that learning happens in dialog exchange, but dialog cannot exist in the absence of love. As instructors we must be active and connected to our students’ worlds and that means we must dialog with students. Bell shared strategies to imbed Freire’s strategies into their class as well as some of her students’ reflections. She ended her session with Tom Keene’s poem “Give Me a Teacher.”

The session ended with participants sharing their thoughts and writings. Dr. Chavez also read a poem. 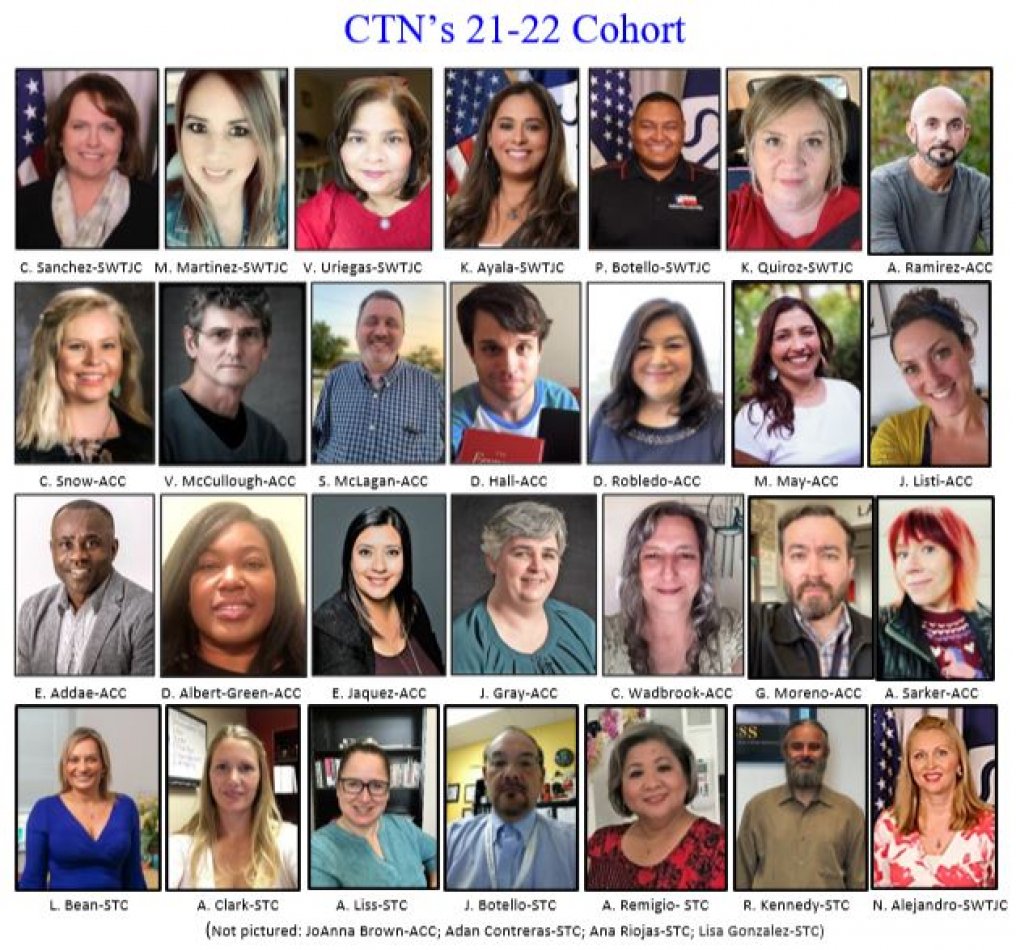