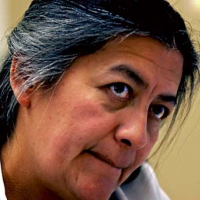 She graduated from Yale University and studied medicine at the University of Connecticut.

The life of Teresa Villela is the realization of every immigrant family's dream. Villela's family moved to Tucson, Arizona, from Mexico when she was 10 years old. Her father sold furniture. Her mother cleaned offices. Despite this, they managed to send the eldest of their five children to Yale University. She acknowledges the role affirmative action played in her education and is determined to give back in a way that has both an immediate and lasting impact. Today, Villela is training the next generation of family physicians while helping to define a new era in family and community medicine. As director of the UCSF Family and Community Medicine Residency Program, Villela could more than fill her schedule with teaching, research and grant writing. But Villela is determined to practice what she teaches: true family medicine. Villela's commitment to her practice shows residents the difference they can make in the health of an individual, a family and the community beyond.

Surprisingly, Villela had only a vague interest in medicine when she arrived at Yale. Her career aspirations in medicine can be linked to her father, who regretted not becoming a physician or pharmacist. Studying medicine was a family tradition as both of his sisters were nurses in Mexico and were married to doctors. Despite only a limited notion of what medicine was about, Villela stuck to her major. However, it wasn't until she volunteered at a women's clinic that she felt medicine was her true calling. At 21, she was counseling poor pregnant women - in English and in Spanish - about their health and their options regarding their unplanned pregnancies. She went on to be hired by that clinic, working as a health educator for four years before going to medical school. Villela continues to serve the medically underserved and hopes to see the day when there is universal health care in the United States. "We must work toward it and not just accept what we're given," says Villela.