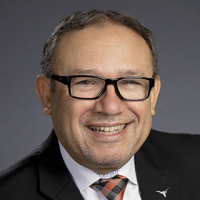 Pedro Reyes received a bachelor’s degree in American History and Education and a Ph.D. in Education Policy & Administration from The University of Wisconsin–Madison.

Reyes is personally and professionally passionate about education research and the craft of teaching. In his writing, Reyes focuses on student success, particularly for children living in poverty, and he has had articles appear in several prestigious journals, including Educational Administration Quarterly, the High School Journal, Journal of Educational Research, and the Hispanic Journal of Behavioral Sciences. He has authored several books, including Resiliency and Success: Migrant children in the US (2004); Lessons from High Poverty High Performance Schools: Creating Learning Communities (1999); and Teachers and Their Workplace: Commitment, Performance, and Productivity (1990). In addition, Reyes has authored numerous scholarly articles, book chapters, and monographs, including a significant number of papers presented at national and international academic conferences, and held positions with many scholarly journals, including Editor of the book review section of Educational Researcher and Associate Editor of the International Journal of Qualitative Studies in Education. Reyes has raised more than 22 million dollars in research development grants from foundations including: The Spencer Foundation, The Annenberg Foundation, the Spencer T. and Ann W. Olin Foundation, the Texas Education Agency, the National Science Foundation, the Houston Endowment, Inc., The Brown Foundation, and the U. S. Department of Education.

Professional recognition for Reyes includes several notable distinctions. The National Academy of Education selected him as a fellow. In 2007, hereceived the Post President’s Award for heading the University Council for Educational Administration, a national consortium of higher education institutions dedicated to improving education administration. Dr. Reyes received the Distinguished Faculty Award from the Texas Association of Chicanos in Higher Education. He has also been named to numerous national committees to review the quality of university programs, such as the Ohio Board of Regents Review for Education Programs.


Resiliency and Success: Migrant Children in the U.S.