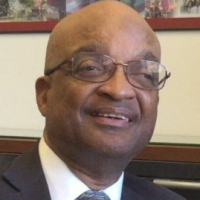 John H. Stanfield II received his Ph.D. and Master of Arts in Sociology from Northwestern University and his bachelor’s degree in sociology from California State University, Fresno. Since earning his Ph.D., he has gone on to earn a Master of Sacred Theology from Boston University, and he is currently a doctoral candidate in Non-Licensure Pastoral Counseling.

Dr. Stanfield was an activist undergraduate leader in the 1970s, during the Black protest movements on American campuses. Since that time, he has progressively become a well- respected scholar practitioner in and outside academia, in public policy-oriented comparative racism, and anti-racism as well as global multicultural restorative justice studies. As a sociologist who spent over thirty years in African, African American, and African Diaspora Studies departments, he has designed and implemented seminars on public policies related to racism and anti-racism, human rights protest movements, anti-discrimination government and civil society policies, and intercultural openness (a field he is helping to pioneer) on and off university campuses.