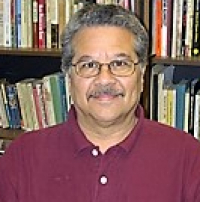 San Miguel is a Professor of History at the University of Houston, who specializes in Mexican American Education. He also has served on the History Department’s Executive and Graduate committees.

Much of San Miguel’s research has focused on the impact of politics, culture, and language on the education of Mexican Americans. His book, Brown, Not White: School Integration and the Chicano Movement in Houston, is a foundational history of the role of race and ethnicity in the school integration movement. He teaches a variety of classes in Chicano studies. Most recently he has taught classes in The History of Tejano Music; Latinos, Politics, & Education; Chicano History Since 1910; The Chicano/a Movement; and Readings in Mexican American history.

He was President of the National Association of Chicana and Chicano Studies, has served on the Board of Directors for the Institute for the History of Texas Music at Southwestern Texas State University, and is on the editorial board of the Journal of Latinos and Education. Professor San Miguel received the Public Forum Distinguished Lecture Award from North Harris College and Outstanding Book Award for the best book on the History of Education in 2001 for Brown, Not White.