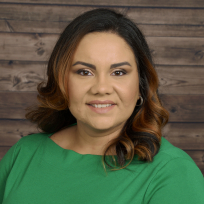 Catherine Prieto Olivarez, Ph.D., was born and raised in the Bronx, NY and moved often between Texas and New York. She graduated from Temple High School in Temple, TX and left for her new home in San Antonio to attend the University of Texas at San Antonio. There, she earned a B.A. in Psychology in 2006 and an M.Ed. in Educational Leadership and Policy Studies in 2010. In 2017, she earned a Ph.D. in Higher Education and a Community College Leadership certificate from the University of North Texas.

Currently, she is the Articulation Specialist for Guided Pathways to Success with the Dallas County Community College District and is an adjunct at Richland College. She has previously held positions in enrollment management, student affairs, and academic advising at UNT, TAMU-SA, and UTSA.

Her dissertation examined why Latina/o students under matched; more specifically, Latina/o students had been admitted to a university yet chose instead to attend a community college. For this work, she received an Honorable Mention for the 2018 American Association of Hispanics in Higher Education (AAHHE) Kurt M. Landgraf Outstanding Dissertation Award. Olivarez continues her research on community college choice, the role of parents and families, and upward transfer for Latinas/os. She examines issues of student access, transfer, and equity in higher education, particularly for Latinas/os and students who begin their higher education journey at a community college.

Catherine has presented her work at various local, regional, and national conferences including the American Educational Research Association (AERA), the Association for the Study of Higher Education (ASHE), the Council for the Study of Community Colleges (CSCC), and AAHHE. In 2015 and 2016, she was chosen to participate in the AERA Division J (Postsecondary Education) Emerging Scholars workshop, and in 2015, she was named a Graduate Student Fellow by AAHHE.

Passionate about mentorship and leadership development for young Latinas, she is a member of the Dallas Chapter of the Hispanic Women’s Network of Texas and has served in numerous leadership positions within Sigma Lambda Alpha Sorority, Inc. (a Latina-based, service-oriented sorority), including as an Alumna Advisor to several chapters over the last 12 years. She has twice won the Alumna of the Year Award (2015 and 2018) for her mentorship of her sisters and contributions to the organization, both locally and nationally. As of July 2018, she was recently elected to serve as the Executive Director to the organization’s National Board of Directors.


The Role of Families in Latinx College Choice