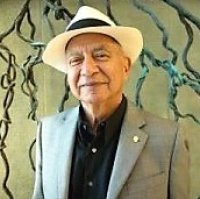 Auturo Madrid received his bachelor’s degree at the University of New Mexico and his master’s degree and Ph.D. at UCLA.

He has had a long and diverse career, having served as a professor and administrator at both public and private colleges and Trinity University; as a federal official; as the director of a national fellowship program; and as the founding president of an institute for policy studies.

During his tenure at Trinity, he has been deeply engaged in connecting Trinity University faculty, staff and students with a wide range of San Antonio Latino arts and educational organizations and with sponsoring programming having to do with Latinos on campus. He has been heavily involved with the community, including: the Guadalupe Cultural Arts Center, The Esperanza Peace and Justice Center, Museo Alameda, Intercultural Development Research Association Latino Exchange, and Mexico, The Americas, and Spain—a program dedicated to enriching the bilingual and bicultural environment on and off campus by providing student with the opportunity to engage in Latin American, U.S. Latino/a and Spanish culture.

In 1996 he was awarded the National Endowment for Humanities' highest honor, The Charles Frankel Prize; and in 2009, he received the John Hope Franklin Award.

He has written extensively and made public presentations on educational status and artistic and cultural expression of the Latino populations of the U.S.

Over the course of his career, he has served on numerous national commissions and boards concerned with educational issues, including the 2006 U.S. Secretary of Education's Commission on the Future of Higher Education.

National Endowment for the Humanities


"Of Heretics and Interlopers," A Companion to Latina/o Studies, Blackwell Publishing, 2007, edited by Juan Flores and Renato Rosaldo, pp. 159-168.