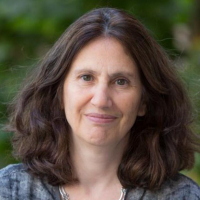 Alicia Fernandez received a BA from Yale and her MD from the Albert Einstein College of Medicine.

She is a Professor of Medicine at the University of California, San Francisco and practices primary care medicine as a general internist at Zuckerberg San Francisco General.

The violence and political turmoil of Argentina in the 1970s forced Alicia Fernandez and her family to flee to the United States, leaving behind what’s known as the Dirty War, a seven-year campaign that targeted suspected left-wing dissidents. She and her family immigrated to New York City.

Fernandez’s passion for social justice began with that early experience. It strengthened after college, when she worked as an activist for immigrant populations and with those affected by HIV/AIDS. She also realized that becoming a physician could give her valuable tools for helping give underrepresented people a voice in determining their health. Throughout her career as a practicing general internist, she has worked to increase diversity at UCSF, to encourage physician-researchers who care about underserved populations and to study and implement changes that will reduce cultural and language barriers to chronic disease care.

In the mid-1990s, while an internal medicine resident at UCSF, Fernandez happened to see a public service announcement on television entitled, “HIV Stops with Me,” which projected how HIV-positive victims were taking it upon themselves to prevent the spread of the disease within their community. This galvanized her views on vulnerable populations and disparities in care.

Fernandez has retained that perspective throughout her life’s mission to improve the health of Latinos and vulnerable patients in general. In one of her current projects, a campaign called “Diabetes Stops with Me,” Latino parents and grandparents are encouraged to lessen the chances that their children and grandchildren – who have an increased biological risk of developing diabetes – will develop the disease. Her campaign hopes to play an important role in stopping the intergenerational transmission of the disease.

A member of the UCSF Academy of Medical Educators, she received the Arnold P. Gold Foundation Professorship for Humanism in Medicine (2009-2013). She directs UCSF PROF-PATH (NIMHD R25 MD006832), an academic career and research training program for URM students and students focused on health disparities research; is co-PI of RISE (NHLBI R25HL126146), a national training program in implementation science for URM faculty; and core-PI of SF BUILD (U54MD009523) a joint capacity building program between UCSF and San Francisco State University. Dr. Fernandez has served as an advisor to many organizations on health disparities related projects, including the Robert Wood Johnson Foundation, the California Endowment, the National Quality Forum, the Commonwealth Fund, the American Medical Association, and the American Board of Internal Medicine. She has also been appointed to the Board of Governors of the Patient Centered Outcomes Research Institute (PCORI) and the National Academy of Science Roundtable on Health Literacy and has served on both since 2014. At UCSF, she has also served as leader in the Differences Matter initiative for health equity since 2015.

Getting By: Underuse of Interpreters by Resident Physicians