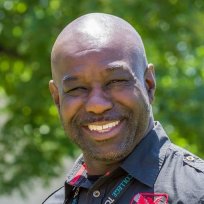 He has successfully fused the art of Spokenword and social awareness in a way that has made him one of the most sought after motivational speakers specializing in creative social awareness and youth empowerment. He is also the founder of the PSI Certified Fort Worth National Poetry Slams and the ForthWrite National Youth Poetry Team and is internationally renowned as one of the world’s hardest working performance poets, emcees, coordinators, poetry slam masters and youth/adult Spokenword event promoters. Guinn is also the co-founder of the NATIONAL POETRY AWARDS, The North Texas Spokenword Awards, Texas Spokenword Awards and continues to host several ongoing weekly, monthly, and annual poetry open mics for the past 16 years. He has appeared, featured, judged, hosted, facilitated workshops and helped organize events for the Austin International Poetry Festival, The Valley International Poetry Festival, The Arkansas Grand Slam, and The World Poetry Slam Championships just to name a few.

Role Call: A Generational Anthology of Social and Political Black Literature and Art