MEET THE NEW CTN BOARD MEMBERS

MEET THE NEW CTN BOARD MEMBERS

In 2015, Dr. Garza was appointed president of Mountain View College (Dallas County Community College District). Under his leadership, Mountain View College recorded its highest levels of enrollment in the fall 2017 semester and again in spring 2018, enrolling more than 10,300 credit students.

Dr. Garza has presented at numerous conferences on subjects including enrollment management, student development, and the role of student affairs in facilitating student success. He was awarded the V. Ray Cardozier Alumni Excellence Award by the University of Texas, which honors a graduate of the doctoral program in higher education who demonstrates excellence in their scholarly/professional work. Dr. Garza holds a bachelor's degree from Texas A&M University, a master's degree in public administration from the University of Texas at San Antonio, and a doctorate in educational administration from the University of Texas at Austin. His dissertation focused on Faculty Perspectives in Online Learning, which included a study that utilized Interactive Qualitative Analysis to identify challenges in online education and capture faculty perceptions about online learning.

Nora was inducted into the Class of 2009 as an AERA Fellow for his scholarship in the field of higher education. He is currently a member of a Technical Review Panel for the U.S. Department of Education, the National Center for Education Statistics (NCES), and the National Science Foundation (NSF) focused on the National Educational Longitudinal Study, 2000 – 2012. He has also served as consultant to the American Council of Education, National Advisory Board member for the evaluation of GEAR UP, reviewer for the National Research Council in Washington, DC. and evaluator for two major projects, the National Center for Urban Partnerships (NCUP) and the Houston Annenberg Challenge project. He has served as Content Expert on Higher Education, ERIC Steering Committee, Department of Education, 2004-2006; as a panel member on the National Research Council of the National Academies, Ford Foundation Diversity Fellowships Program, 2005, 2006; a consultant on outcomes assessment for the Title V Project, Houston Community College System, 2004-2009; as consultant for the NPEC Project on Student Success funded by the National Center for Education Statistics, U.S. Department of Education, 2003; advisor to the Task Force on Student Enrollment at California State University-Long Beach, June 2002; advisor on standardized testing and minority college admissions and data analysis, NAACP Legal Defense Fund, New York, February-April, 2000; and has provided testimonial on factors affecting the retention of minority students before a panel for the Southern Education Foundation, State Capital, Austin, Texas, February, 1994.

Dr. Saenz is Dean of the College of Public Policy and holds the Mark G. Yudof Endowed Chair at the University of Texas at San Antonio.  He also is a Policy Fellow at the Carsey School of Public Policy at the University of New Hampshire.  Sáenz has written extensively in the areas of demography, Latina/os, race and ethnic relations, inequality, immigration, public policy, and social justice.  He co-authored Latinos in the United States: Diversity and Change and co-edited The International Handbook of the Demography of Race and Ethnicity.  Sáenz regularly writes op-ed essays on demographic, social, racial, and policy issues for a variety of newspapers and writes a monthly column for Ahora Sí , the Spanish-language newspaper of the Austin American-Statesman .  Earlier this year, the American Association for Access, Equity, and Diversity presented Saenz its Cesar Estrada Chavez Award, an honor that recognizes an individual who has demonstrated leadership in support of workers’ rights and humanitarian issues.

Ms. Galvez is currently an Assistant Dean at Yale College and Director of Yale’s La Casa Cultural/Latino Cultural Center. Prior to Yale, Ms. Galvez worked at Illinois Wesleyan University, where she served as assistant director in the university’s Office of Diversity & Inclusion since 2013. In that role, she has overseen and coordinated programming for multi-ethnic, African-American, Latino/a, Asian American, Native American, and LGBTQ students, and she has also coordinated its Summer Enrichment Program. Before going to Illinois Wesleyan, Galvez served as coordinator of leadership & diversity in the Office of Student Life at Austin Community College, where, among a long list of other duties, she developed and oversaw leadership programs for the college’s eight campuses and 40,000 students. Galvez earned both her M.Ed., in guidance and counseling, and her B.A., in political science, from Texas State University.

Ms. Galvez is a first- generation college graduate and second- generation immigrant. Her mother lives in Baytown, Texas.  Her passions lie in social justice and the impact that an education can have on individuals and community groups.  Galvez is currently pursuing a doctorate from Colorado State University.

In 1987, she left Oxford for Stanford Law School. There, she served on the Stanford Law Review and the Stanford Journal of International Law. In 1990 after three years at Stanford, she completed the thesis work she had started as a Rhodes Scholar, and was awarded a Master of Letters in Politics from Oxford. The same year, she earned a law degree from Stanford Law School. Following Stanford, Sandoval served for a year in Pasadena as a law clerk to Judge Dorothy Wright Nelson of the United States Court of Appeals for the Ninth Circuit. Sandoval is the first Hispanic commissioner of the California Public Utilities Commission.  Ms. Sandoval served as Deputy Director of the Federal Communications Commission under the Clinton Administration.

Lillian Diaz Gray is a community relations manager at Bank of America, previously an assistant Vice President and Financial Advisor at Merrill Lynch in Austin. An alumnus of Yale University, Diaz Gray is actively involved in the community with ties to the Junior League of Austin, Con Mi Madre, The Association of Latino Professionals in Finance and Accounting, Women in Finance and Insurance, The Hispanic Women’s Network of Texas, Texas Wall Street Women, the Austin Chamber of Commerce, Greater Austin Hispanic Chamber of Commerce, and the National Association of Hispanic MBA’s, amongst others. She is a graduate of Yale University.

Matthew Reyna is a San Antonio native with a passion for healthcare and education equity. Matt was born and raised in San Antonio and attended St. Mary’s University where he received his Bachelor’s degree in English. After ten years of working at and managing a senior living facility, Matt decided to pursue his Master’s in Healthcare Administration from the University of the Incarnate Word. During his time at UIW, Matt worked for CHRISTUS Santa Rosa as a consultant analyzing the effects of an $8.5 million-dollar hospital expansion project.

Mr. Guinn has a Bachelor’s degree and a Master’s Degree in Social Work from UT Arlington. Mike began writing prose and poetry inspired by his work as a child abuse investigator in 1997. He has successfully fused the art of Spokenword and social awareness in a way that has made him one of the most sought-after motivational speakers specializing in creative social awareness and youth empowerment. He is also the founder of the PSI Certified Fort Worth National Poetry Slams and the ForthWrite National Youth Poetry Team. Guinn is also the co-founder of the NATIONAL POETRY AWARDS, The North Texas Spokenword Awards, Texas Spokenword Awards and continues to host several ongoing weekly, monthly, and annual poetry open mics for the past 16 years.

For the last eleven years Mike has coordinated and hosted the MLK Evening of Spoken word for the City of Arlington at UT Arlington. Mike has won several international competitions and is considered one of the best for creative writing and emotional leadership.

Veronica Cavazos started her career in education 16 years ago as a fourth-grade teacher in her hometown of Laredo. The four years she dedicated to working with English language learners gave her the opportunity to learn about the varied educational needs of recent immigrants and students from low-income households. After receiving a Master’s of Public Administration from Texas A&M International University, where she focused her research on the educational attainment of the border region’s population, Veronica turned her sights to higher education. In 2007, she began working for Laredo Community College as a Community Outreach Specialist and after a year of working directly with students, school districts and local agencies to increase student enrollment, she was promoted to Director of Academic Advising and Student Success. In that role, she was responsible for leading all student recruitment, advising, counseling and retention efforts at the college.

In 2010, she and her family moved to Austin, where she began working as the College Readiness Program Manager at Austin Partners in Education (APIE), a non-profit dedicated to serving the Austin Independent School District. After four years of developing and expanding APIE’s College Readiness Program, she was promoted to Programs Director. She currently serves as the Associate Director where she leads all aspects of program operations and plays a key role in developing and executing the organization’s long-term vision. Veronica lives in Round Rock with her husband and two children, Carlos and Alejandro. In her spare time, she enjoys visiting art museums, practicing photography and listening to live music. Veronica also holds a Bachelor’s degree from the University of Texas at Austin.

Esmeralda Macias is an English Instructor at South Texas College, and she has been part of the STC family from the beginning. Esmeralda believes that each student is a unique individual who needs to grow and mature emotionally, intellectually, physically, and socially. She has a Master of Arts in Literature and Cultural Studies from the University of Texas-Pan American, Bachelor of Arts in English from the University of Texas-Pan American, and an Associates of Arts in the Interdisciplinary Studies from South Texas College. Most recently, Esmeralda received the South Texas College Faculty Spot Light Award for her excellent writing strategies, and she received a nomination for Faculty of the Year Award. In addition, she was recognized by Catch the Next and received the Leadership and Service Award for her leadership and dedication to the Catch the Next Program.

Esmeralda is passionate about programs that help students succeed; therefore, she was excited to earn the Professional Development Certificate (PDC) from the Puente Summer Institute (PSI) from the University of California at Berkeley, where she committed herself to support students in an intensive yearlong Integrated Reading and Writing Program. In 2017, Esmeralda received the National Institute for Staff and Organizational Development (NISOD) award for her excellence in teaching. She is also part of the Development Curriculum Board and was part of the Developmental Education Initiative (DEI) Program, which was a three-year effort to identify and develop programs that increase the number of community college students who complete preparatory classes and successfully move on to college-level studies. As part of her ongoing effort to help students develop their education and life skills, she is excited to be part of the Catch the Next Organization for the past years. She has presented at several conferences including Catch the Next (CTN); Texas Community College Teachers Association (TCCTA); College Academic Support Programs (CASP); and the Texas Success Initiative (TSI) Professional Development Program. 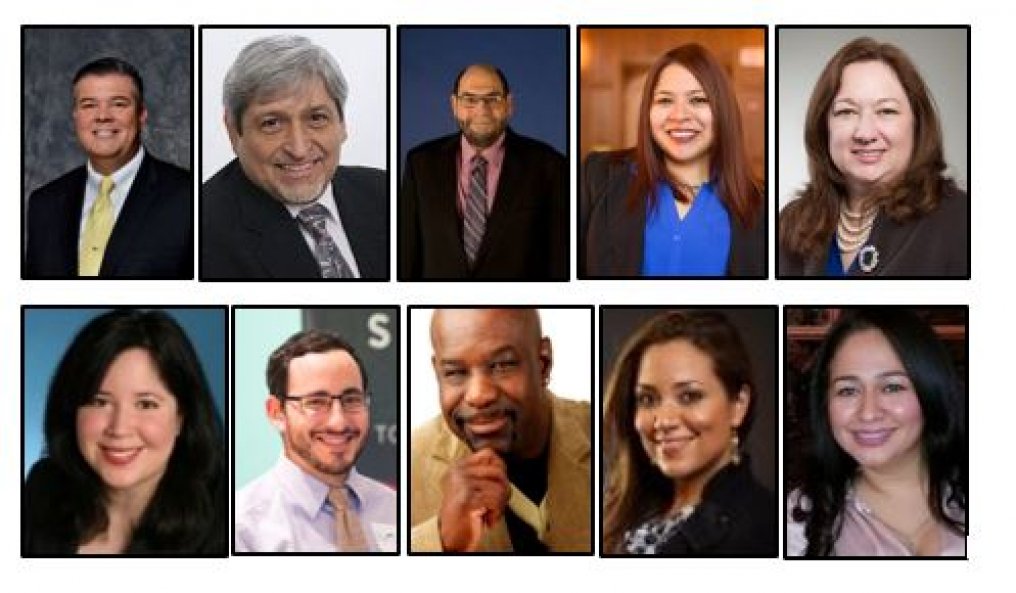