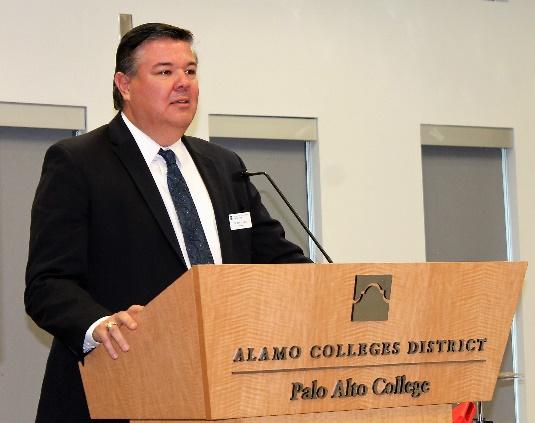 Garza has served as president of Mountain View College, part of the Dallas County Community College District, since February 2015, and is credited with increasing student enrollment to over 10,000 credit students, implementing eight early college high school and industry partnership programs, and expanding the nursing program.

Garza worked at Palo Alto College from 1999 to 2015 in a variety of positions including Vice President of Student Success, Dean of Student Success, and Dean of Community Development and Partnerships. He holds a Ph.D. in Educational Administration in Higher Education from the University of Texas at Austin; a Master of Public Administration from the University of Texas at San Antonio, and a Bachelor of Science in Agricultural Development from Texas A&M University in College Station.

The Palo Alto College presidential search fielded more than 78 applicants for the position. A search committee comprised of faculty, staff, students, and partner stakeholders interviewed eight candidates based on their background experience and alignment to Palo Alto College's mission, vision, and values before selecting three finalists for community forums with faculty and staff.

"Bringing an individual like Dr. Garza, with more than 15 years of experience in south San Antonio, is an important factor in understanding the community we serve," said Flores. "Dr. Leslie and I have the utmost confidence in his ability to lead Palo Alto College in its next chapter, and I look forward to collaborating with Dr. Garza on the College's continued journey to excellence."